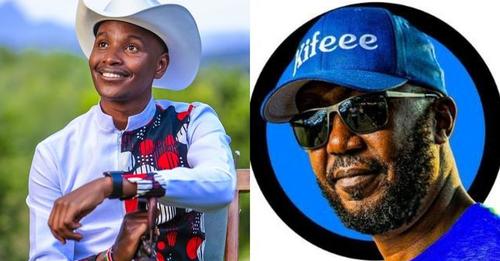 Andrew Kibe got into trouble on Monday, November 21 when he launched an attack against Mugithi singer Samidoh.

The Gossip YouTuber and self-appointed masculinity coach Andrew Kibe called out the Mugithi singer for being an unbridled cassanova.

Samidoh is known to take no prisoners when dealing with cantankerous fans or commentators online.

Kibe, in a video on his You Tube channel, claimed Samidoh had turned down an invite to hang out together.

He further went ahead to claim the artiste had declined and instead hangout with girls.

Kibe proceeded to paint a hapless portait of the Mugithi musician, describing him as immensely talented but losing focus due to his love for women.

“I asked Samidoh to come and I show him around during his weekend off when he was here for the tour. Just to show him how the rich gang lives. I was going to host him

He wants to just hang out with women. Now women are fighting over him. I would never allow women to fight for me on social media… Samidoh, you are weak. You are talented, but the whole energy you have given to three women,” Kibe ranted.

But in a swift rejoinder, Samidoh told off Kibe particularly claiming the content creator did not have a place of his own in the US.

He further claimed Kibe was being hosted by a rich couger in the US and there was no way he was going to pay him a visit in the circumstances.

“Haha hata kama ni content. Sometimes tumia tu akili.So i was to leave my work coz a lad has invited me over to his couger’s house? or for a helicopter ride? I am a kikuyu man!.