Samidoh told Betty Kyall that he met his wife in secondary school, and that his spouse is the only woman he approached and ended up marrying.

Mugithi sensation Samuel Muchoki aka Samidoh is arguably the most talked about musician in Gikuyu music at the moment.

His music has struck a chord with the younger generation of music lovers, little wonder his songs receive massive airplay across Mt Kenya region and beyond.

At only 29, Samidoh who has been in the music industry for three years associates his success to divine intervention.

“ I can only attribute my success to God,” said Samidoh during an interview with K24’s Betty Kyalo.

During the interview, the celebrated Gikuyu musician who is also a police officer, disclosed that he doesn’t have an ex-girlfriend. 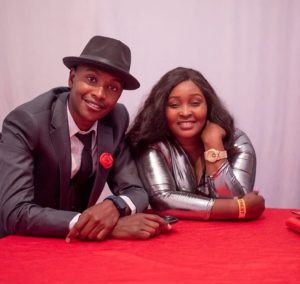 The singing cop who is a married man and a father of two disclosed he met his wife in secondary school.

He told Betty Kyallo that he met his wife during a school outing, and that his spouse is the only woman he approached on and ended up marrying.

He said he had no idea on how to approach girls, a shortcoming he said may have been worsened by the fact he did not have a sister.

“I was a very shy person. So, I was really impressed when I approached my wife in high school and she smiled back at me and welcomed my advances.

She is the only woman I have dated in my entire life. I have no ex-girlfriend; I have never experienced a heartbreak,” said Samidoh.

Samidoh’s wife also said she had never dated any other man in her life besides her partner.

She described the musician as loving, caring and funny.

What’s more, the musician who narrated his growing up in poverty disclosed he was at one time forced to abandon school in class seven to be employed as a herds boy.

He, however, went back to school after her friend’s mother intervened.