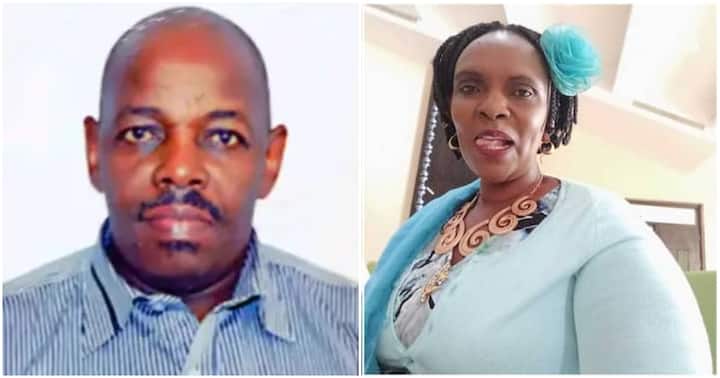 Gladys Chania might have became bitter and vengeful after learning she was sharing her husband engineer George Mwangi with another woman.

On Monday, October 17, a Kiambu court allowed police to detain Gladys and Maurice Mbugua, the prime suspects in the murder of engineer George Mwangi, for seven days to allow police to complete investigations.

A peek into her Facebook page conjures up a picture of a woman who was trying to come to terms with her husband’s decision to get a second wife.

Chania who posted regularly on Facebook shared her thoughts mainly on issues regarding mental health and psychology.

She continued: “Using our memory of better times is actually a tool that can support our sense of self-esteem and overall mental outlook and balance. When we think of prior moments in life.”

On September 9, she posed:

“Is living happily ever after really practical?

She proceeded as if to answer her own question. 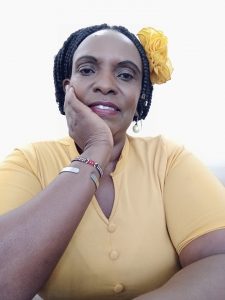 Gladys Chania in one of her Facebook photos. PHOTO/COURTESY

“Living with another human being long-term is difficult.”

A lot is hidden on what it means to stay together for decades. It is not relationships that are hard to maintain long-term, but anything worthwhile: even children, careers and life itself.”

Another telling post was on September 23 when she posted:

“The source of cheating in marriages is polygamy in the background, cast the demon of immorality, adultery and lust. Engage love, care, communication and humility…if it works for both of you, well (heart emoji)

On September 27, she posted:

“Let’s mourn all “found dead” and condole with the families as we rebuke the spirit. 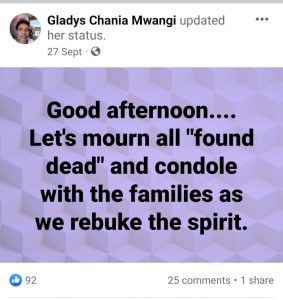 One of the disturbing posts by Gladys Chania. PHOTO/FACEBOOK

Later on in the same day, the counselling psychologist posted:

“Marriage is not a bliss, love is an amazing thing if you can feel it.”

“Heartbreak is part of life, whether it be a loved one, a boyfriend, girlfriend or an animal. But time heals all wounds.”

On September 28, she posted:

George Mwangi’s body was discovered in a forest, with evidence showing the crime was committed at their home.

The former Kiambu County woman representative candidate posted a message on Facebook on Tuesday, October 16, the same day she reported her husband missing. 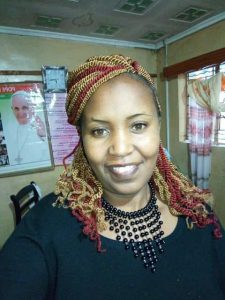 “If you can’t understand life, just go and talk to a growing up child and restart yourself.” She posted.

Mwangi met his second wife Lucy Muthoni in 2021 as she looked for a house to rent. One thing would lead to another and the two became an item.

Mwangi who arrived in Kenya on September 13 from Rwanda attended a family function with Muthoni and Chania before going missing the next day on October 16.

William Ruto Will Defeat Raila in August 9 Election. This is Why
WATCH: Daughters Rebuke Cheating Dad, Read Out His Side Chick’s Texts
To Top