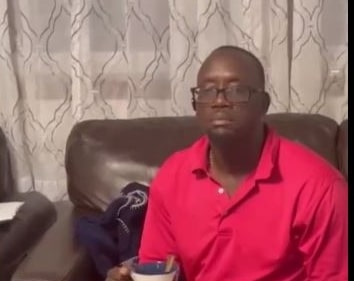 What would you do if you found out that your dad has been cheating on your mum and causing her emotional pain?

Would you reprimand him or would you leave the two – your dad and your mum- to sort out their issues.

Well, a video of daughters reading out to their dad’s cheating messages, has stirred mixed reactions online.

“Dad, you f***ed up” one of the daughters is heard repeatedly reprimanding his dad.

The man and his family said to have roots from Uganda is in the sitting room when it all begins.

One of the daughters goes berserk as texts between the man and his side chick are read out.

She, at one time, warns she will kill the man for humiliating their mother.

“Don’t act like you don’t know” she shouts as another daughter reads the messages.

Another girl reads a section of the text, thus:

“I just thought that this would end us in a secure place I’m so fed up just know I am so mature Truly miss your vibe” goes the text.

These kids checked their Dad’s Phone, found messages between him & another woman cheating on their mom, confronted him as they displayed the messages for everyone to read in the living room.

This is a Ugandan Family in USA. pic.twitter.com/QtoEIGLsNx

“I know what’s nice to you believe me just next time it will be bloody if you can keep it up” continues the text.

In another text, the father was making plans to go swimming with his side chick.

“I wanna sit on you but I will be patient and wait, I will be free from cramps”

All this while the dad sits silently, perplexed, looking on with a cup of tea.

He on several occasions tries to calm the situation to no avail.

The video has attracted mixed reactions with a section of the netizens blasting the kids for disrespecting their father.

“A man who does not command the respect of the family enough for a request – “Dad, may we speak to you please”, at the family table, doesn’t seem to know or require protocol.”

“Regardless of skill, men do lead. In all honesty, if your house is a chicken coop and you call yourself the alleged leader, then yes, the buck stops with you.”

Another netizen remarked: “Those kids may not be his. A simp is a danger to himself, to Africa and the globe at large?

Brothers! Why be a simp?”

“His daughters do not recognize the boundaries. They have no knowledge of decency and respect.

“These are kind of men who plays and hugs their daughters, they even sit in the living room together wakipiga story.

I never saw my sisters sitting in the living room with dad together.”