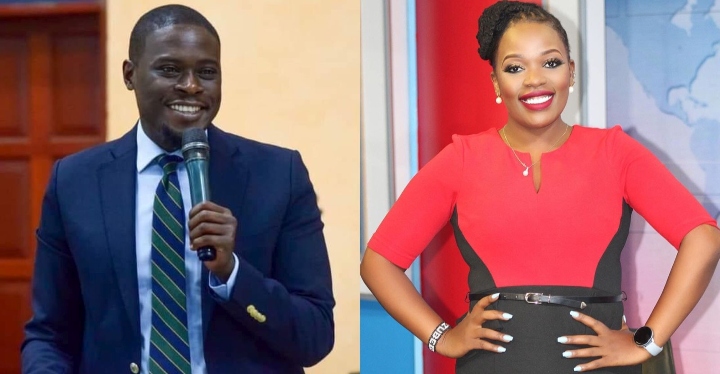 KTN News Swahili news anchor Zubeida Koome has been put on the spot over how he conducted the Nairobi Governor Debate on Monday, July 11.

Koome was the moderator when aspirants Polycarp Igathe of Azimio One Kenya Alliance and Johnson Sakaja of Kenya Kwanza Alliance went head to head.

While the leaders tackled various issues, Zubeida on the other hand was being roasted over what netizens termed as being biased and partisan.

At one point, the news anchor and the Senator engaged in a verbal war over the his name after Igathe inquired if Sakaja was really the latter’s name.

Sakaja told off Zubeida over the same terming the question a non-issue as far as the Nairobi gubernatorial race is concerned.

Zubeida: is your names Sakaja?
Sakaja: Is your name Zubeida?
Zubeida: I'm the one asking the questions
Sakaja: If you ask unnecessary questions I give you unnecessary answer!
Zubeida: Just tell us if your name is Sakaja
Sakaja: Who did you invite?#NairobiGovDebate2022 pic.twitter.com/bVMnEgJ4nY

Following the exchange, Zubeida Koome was a topic of discussion on Twitter as Kenyans put her on the spot for asking unprofessional question.

That question "Is your name Sakaja" will go down in history as evidence of what professional journalism is not!

Media is all about balance and fairness.
The criticism by most Kenyans on Zubeida is justified.
If Social Media nuances were part of what she was to ask, why ask Sakaja alone ?
She failed in that regard and poisoned public opinion against her from the get go..

Zubeida you've hit below the belt buana. Why ain't you objective on the real issues. You can invite someone and ask him if he is Sakaja.
'Is your name Sakaja?' even a pre-unit toddler won't ask such a question. pic.twitter.com/14NBYtvFr1

Zubeida Koome and team invites Sakaja to this debate, she then invites the same Sakaja to the podium by mentioning his name. But she stoops too low to ask him his name. Bure kabisa!

I used to admire @zubeidahkananu but after her interview with Ruto and now Sakaja handling, don't let her near any other debate, she will make it about herself and her anger issues!

Zubeda?, Zubeda? How many times have I mentioned your name? Be careful when dealing with guys who are Smart upstairs, you will be embarrassed to the dot. Try to avoid useless questions, don't think that all people will respect you as a moderator.

I think Zubeida wanted to sarcastic by that "jina lako ni sakaja" question. However, the manner in which she escalated it and behaved throughout the debate was such a low for her.

Zubeida's attitude is that of a very unrefined journalist. @zubeidahkananu is far from being ready to conduct any meaningful debate. She should be confined to reading news….reading news for 10 or 20 years doesn't make one a journalist