Keroche Breweries CEO Tabitha Karanja had to fight with her co-wife Jane Wambui Muigai over the company’s shares. Wambui moved to court in 2013 demanding a share of Keroche but her request was denied.

Ranging from being pursued by the Kenya Revenue Authority (KRA) over tax evasion allegations to being fought by her co-wife in business ownership, the business mogul has seen it all.

In 2013, Tabitha was embroiled in a property row with her co-wife Jane Wambui Muigai, with the latter demanding a share of Keroche, the biggest privately owned brewery in Kenya.

It all started in 1996 when their husband, Joseph Muigai Karanja, divided his wealth equally between them.

Just like the biblical Parable of the Talents, each wife invested the wealth in a manner she wished.

For Tabitha, she single-handedly invested her share of the inherited property in Keroche which has since grown to a multi-billion empire. 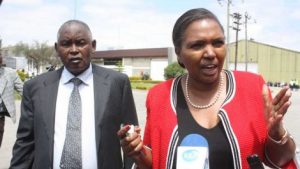 It is unknown what her co-wife Wambui did with her share but it seems she misappropriated it as she moved to court in 2013 demanding a share of the wealth generated by her husband and Tabitha through Keroche.

However, Justice Mumbi Ngugi dismissed her request saying Tabitha invested in the company unaided as even their husband Karanja is listed as the chairman of Keroche’s board and not a shareholder.

“She is a shareholder, director and chief executive officer of Keroche Industries Ltd which she states she built singlehandedly by investing her money into the business to which the petitioners (Wambui) did not contribute at all,” the court was told.

In the ruling, Mumbi argued that there are no circumstances under which a private citizen like Tabitha should be compelled to provide for another adult citizen like Wambui who does not have any disability.

At the moment, Tabitha is involved in a bitter tax war of KSh 322 million with KRA which culminated in the brewery’s closure on February 1, 2022.

She has also declared her interest in Nakuru senatorial seat in the forthcoming August 9 General Election.

Degree-Educated Waitress in Tears as Customer Tells His Son ‘Not to Become Like Her’
Monny Muthoni: 6 Photos of Woman Who Took Own Life after Being Dumped by Boyfriend
To Top