The Jubilee Party headquarters in building in Pangani, Nairobi has been put up for auction.

The new development was contained in a public notice by Garam Investments Auctioneers and advertised on the Daily Nation.

According to the advertisement, the auction is set to take place at the firm’s office located in Westlands, Nairobi on September 11.

The auctioneer noted that bidders will be required to produce a bidding deposit of KSh 5 million by way of cash or bankers cheque before being allowed to bid.

“All that parcel of land known as LR no 209/1530 Emani Business Centre along Thika Road, Pangani area registered under Farmer Industry Limited, with a plinth area of 34, 000 square feet,” the advert read.

The headquarters of the Jubilee Party of Kenya in Pangani is up for auction: pic.twitter.com/je7FnJ1JPZ

The Pangani headquarters was the party’s nerve centre in the last polls and houses offices crucial to its operations.

In August 2021, the Jubilee Party was put on the spot for spending over KSh 87 million on rent for its headquarters.

Auditor General Nancy Gathungu put the party on the spot after failing to register the lease agreement for the property.

The Registered Land Act requires the registration of leases for a specified period exceeding two years.

“In the circumstances, the regularity of the lease agreements and the resultant payment could not be confirmed,” Gathungu said. 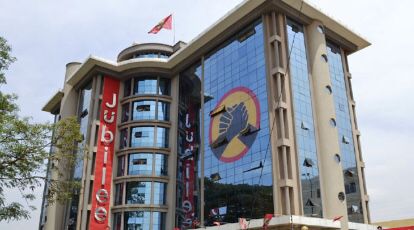