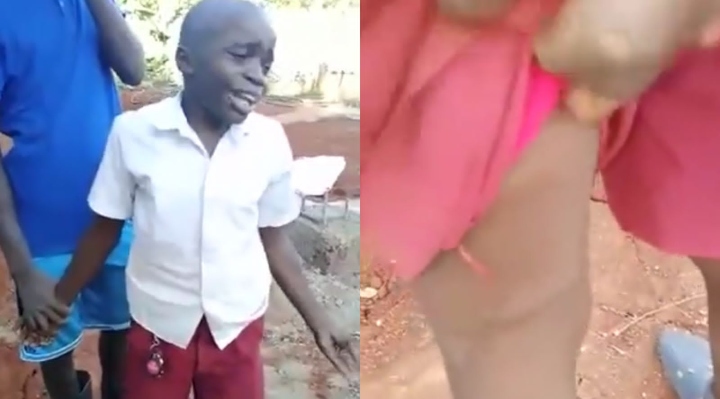 A video of a Kenya Certificate of Primary Education (KCPE) student crying while lamenting how teachers beat him has sparked outrage on social media.

In the video, the schoolboy painfully narrated how two teachers punished him before classes after failing to attain 400 marks.

He noted that the beatings have become unbearable and he even contemplated harming himself than persevering the punishment.

The schoolboy had visible marks on his back and lower thighs.

Listening to this kid crying, he was allegedly punished by two of his teachers for failing to attain 400 marks.

He is a KCPE candidate and has persevered 11 years in the school. pic.twitter.com/jS102MTbiD

This is what Kenyans has to say about the video.

Wambui Nyaga: Yaani did those teachers get 100% in their exams? How can they frustrate a young boy trying to do his best! Is he getting the marks for the teachers or himself? This is so painful. It’s not even indiscipline!!! He had even to run away coz of the pain.

Jayne Kariuki: I also didn’t finish watching it. I don’t know what will happen to him he’s already registered for the exams in the same school he needs a different environment and then go back to do exams only.

Turk Voices: This is so bad. You can’tforce someone to be brighter thanthey’re. What they get is within their capacity. Beating a young boy like this will end up demoralizing him instead. We’ll have different levels of our intelligent and it’s absurd to force someone to be above thatlet them learn amicably and they’ll be better instead of this beatings.

Mary Anne: It’s soo sad and painful. Relating to this story. My nephew went through this kind of beating while still young in a boarding school in kiambu county the teacher would use mbau and he had marks on his legs and back. This kind of teachers may they never know peace for the trauma they instill in the young children.

Standard reported that police has since launched investigations into the same.

It has since been established that the incident happened at Nyamninia Primary School in Yala, Siaya County.

“We’ve reached the school for comment, and sooner or later we’ll get clearer details on what exactly happened,” Odongo said.