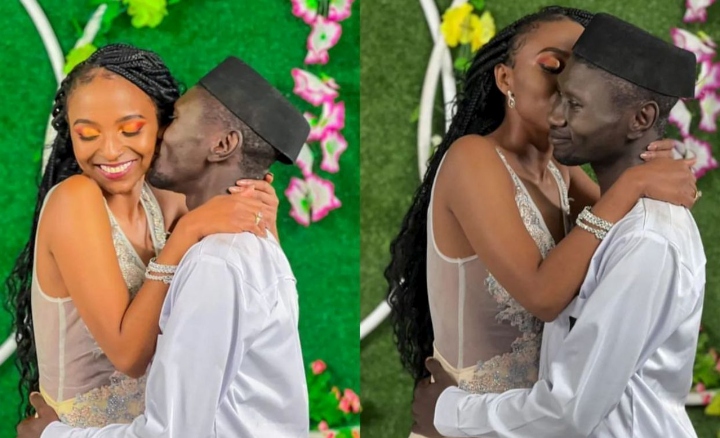 The musician introduced Gee as her new lover after proposing to her in a beautiful private ceremony on Monday, July 25.

According to a video of his proposal, Stevo Simple Boy wore a white outfit and a black cap while his lover wore a white gown.

The musician ambushed Gee who was having a chat with her friends and beautifully asked for her hand in marriage.

Gee was surprised as she covered her mouth in disbelief before accepting the proposal.

It still remains unclear of the proposal was real or it is part of a music video that they are working on.

This is what Kenyans had to say about the proposal.

Kennie Balo: Wueh! Hope the lady is genuinely in love.

Esther Baumbah: Ghai ilikua serious. Congratulations to them. When your ex moves on like lighting.

The proposal came hours after media personality Kamene Goro turned down the musician who had professed his love for her.

Speaking on her radio show on Monday morning, July 25, the media personality acknowledged the confession but turned down the musician.

Kamene also disclosed how she first reacted to the video.

“I woke up in the morning and my phone was just buzzing out of control. I opened WhatsApp and I had been tagged in different groups. I was like ‘who died?’ Then I saw Stevo Simple Boy has professed his love for Kamene,” Kamene said.

The radio presenter noted that she was a fan of the musician, however, maintaining that he is not her ideal man.

“I am Stevo’s biggest fan but let it just remain there brother. He is not really my type. He is not my type. Maybe he was my type back in the day but for now, no, I like them very tall nowadays,” Kamene said.

Stevo Simple Boy had earlier professed his love for Kamene, noting that he doesn’t mind dating the media personality despite being in a relationship.

Trevor Ombija Denies Woman in Viral Photo is His ‘Sponsor’
Wajackoyah Says He Doesn’t Use Plates, Eats Direct From Sufuria
To Top