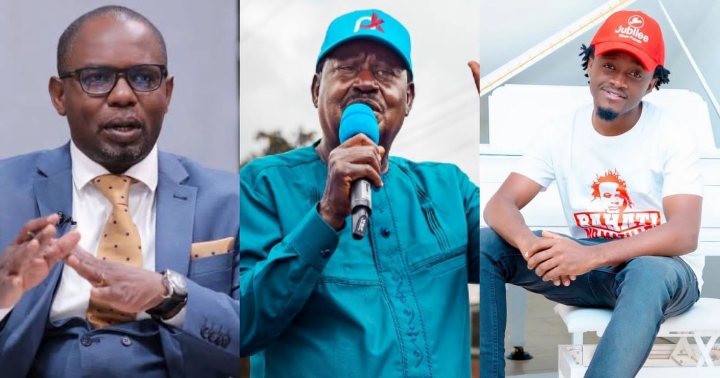 Speaking in a recent campaign trail, the former Prime Minister endorsed incumbent Anthony Oluoch as the Azimio representative for the race.

On the other hand, Raila offered musician Kevin Kioko alias Bahati a job in the government to drop his bid in favour of Oluoch.

Oluoch is vying for the seat on ODM ticket while Bahati is running under a Jubilee ticket; both parties are members of the Azimio One Kenya Alliance.

“Here in Mathare, as Baba I know I have two children in the same race. Do you want me to advice you as Baba? This is what I want

“I have Oluoch and Bahati, and this is what I have decided. I will hold Bahati’s hand. Bahati is my child; I will give him a job in government. Ruaraka MP is TJ Kajwang while Mathare MP is Oluoch,” Raila declared.

Oluoch is vying for the seat on ODM ticket while Bahati is running under a Jubilee ticket; both parties are members of the Azimio One Kenya Alliance. pic.twitter.com/CExuM8bjXN

However, Bahati has since declined the plea by the presidential hopeful, insisting that he must be in the ballot.

In a statement on his social media platforms, the musician stated that he must be in the ballot having been cleared by IEBC and the Jubilee Party.

“I Bahati Kioko will be in the ballot this 9th of August,” Bahati said.

Recently, Bahati and ODM Secretary-General Edwin Sifuna recently engaged in a heated Twitter spat over the musician’s quest for the MP seat.

The argument started after Sifuna claimed that Bahati had bowed out of the race in favour of Oluoch.