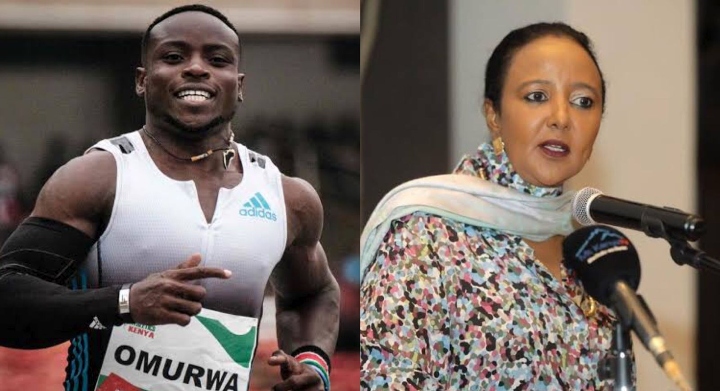 Kenyans have turned against Sports CS Amina Mohammed after sprinter Ferdinand Omanyala failed to make it to the 100 metres finals of the World Athletic Championships.

The sprinter finished fifth in Heat automatically disqualifying him from the race.

Following Omanyala’s exit from the race, Kenyans turned their guns at CS Amina arguing that the visa hitch hugely contributed to his disqualification.

For instance, due to the late visa issuance, Omanyala arrived in Oregon with less than three hours to his scheduled race.

It has since been established that the late issuance of visa was because the list of travelers submitted to the American Embassy by the Ministry of Sports was different from the one approved by Athletics Kenya.

It is reported that 32 people were sneaked into the list of travelers that flew out of Friday the previous week.

It was also alleged that the CS’s daughter Firyal Mohammed was among the joyriders who flew to the US.

The Directorate of Criminal Investigations (DCI) has since launched a probe into the matter.

The new revelation sparked outrage from Kenyans who expressed their disappointment in the CS.

There seems to be a calculated move to kill sports in this country. Football was done & dusted. They've moved to athletics. The only sport we are always assured of getting many medals. How officials get Visas and athletes don't puzzles me. CS Amina Mohammed should be ashamed.

Amina Mohammed employed Uhuru’s daughter as an assistant in her office while she was CS for foreign affairs. She went on to play games with the Education docket and now her daughter is using the sports ministry money to fund her Instagram career.

Amina Mohammed got a visa for her daughter using our taxes to fly to US to watch Omanyala who was still in Kenya coz of "visa problems." Corrupt to the core but we are not going to say it because she is a "woman who speaks good English." You will soon see a sanitation hashtag.

Ministry of Sports has failed us, CS Amina Mohammed atuambie mbona the 32 joyriders walipewa first priority and not our athletes… Omanyala was out there running with jetlag 😭

Kenyans should call for the resignation of CS Amina Mohammed immediately & be probed.
We keep tolerating corruption by sanitizing it with hashtags & fake news.This needs to stop.
Let's excercise our sovereign power together. Kenya is ours & our business not a personal property.

Before we condemn Amina Mohammed,let’s first condemn that person who appointed her to be the cabinet secretary of sports,That woman knows nothing about sports.We have normalize mediocrity in this country.

Mike Sonko was impeached because of taking his daughter on a foreign trip at tax payers expenses.
CS Amina Mohammed should resign from the Ministry of Sports before the plane carrying her daughter Friyal touch down at JKIA.

Amina Mohammed has to account for all the 32 joyriders that went to Oregon,USA . The ministry of sports is rotten and corrupt.

To Kenyans who have sports at heart. Kenyans who love this country and will want to see a sanitized ministry of sports, Amina Mohammed must go. She has killed football,she is now killing athletics and volleyball. We're pushing the tag #AminaResign . There will be a demonstration pic.twitter.com/VDLd59fZoa

Amina Mohammed's daughter wants to use the Sports Ministry money to fund her Instagram career at the expense of Kenyan athletes.