In the viral video, the MP who is part of Deputy President William Ruto’s presidential team was seen being manhandled by anti-riot police officers.

The officers are seen dragging Washiali to a waiting car but the MP resisted the arrest while demanding to know the reason for his arrest.

The back and forth got intense after another man joined to save the MP from being arrested.

The officers, some wielding a rungu, tried to bundle Washiali inside the police vehicle but he successfully managed to defend himself.

It was later said that the MP was arrested for inspecting the Bukhungu Stadium ahead of Kenya Kwanza rally on Sunday, July 31.

However, other claims indicated that he was arrested for vandalizing a gate of the facility.

The video sparked reactions from netizens who took issue with the security officers for using excessive force.

Nelson Havi: A Luhya elected leader being tortured in Kakamega Town by Police Officers on the instructions of top leadership to curtail his freedom of association.

Kawangware Finest: This is unacceptable. If an honourable member Benjamin Washiali can undergo such harassment what about the common Mwananchi? We shouldn’t see such ugly scenes as we head into elections.

John Osoo: Even so, this is not the Kenya we want. The police overstepped their mandate.

Victoria Zillah: This is utterly wrong, I Don’t expect any leader of sound mind to glorify this irregardless of political differences.

Shillah Obare: This is crazy! I have my vote n I know where it will go but violence I’m against we don’t have to reach here.

As earlier reported on GOTTA.news, Washiali who had been reported missing resurfaced claiming that went into hiding to evade the police who were after him.

News about the supposed abduction were shared on social media after the MP disappeared from Shitoto village on the eve of a meeting in Mumias town to address economic issues facing western region that was cancelled by the police.

The rumour of abduction became even more pronounced after his bodyguard and personal assistant recorded statements at Shianda Police Post claiming the MP was missing from his house.

In a phone interview with Nation,  Washiali explained that he decided to escape from his house after a contingent of police officers raided his home on Friday night.

“I heard sounds of vehicles approaching my home and when I peeped through the window, I noticed several police officers surrounding my compound

READ ALSO: MP Washiali not to defend his seat after ruling for 15 years

“I knew they were after me because of the meeting we had organised in Mumias. I escaped through the back door and hid in a thicket behind my home,” said Washiali. 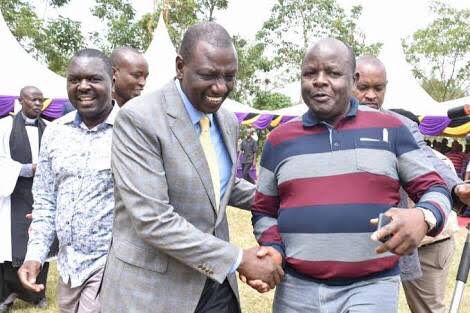