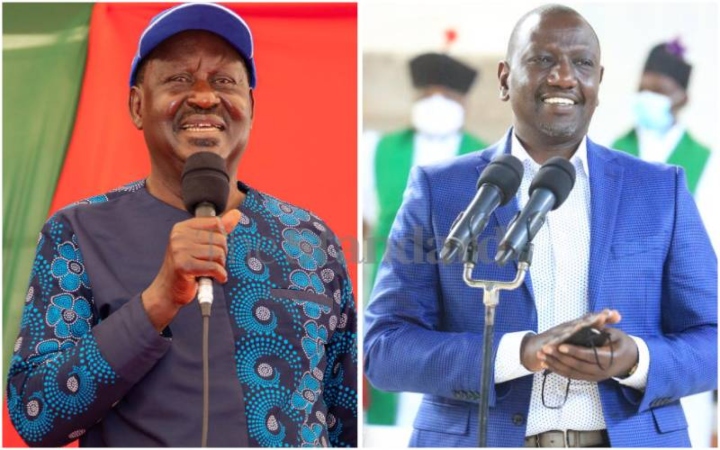 Anybody who has observed Kenya’s political scene might tell you 2022 poll is Raila’s best chance at being elected president of the Republic of Kenya.

Editor’s Note: Our GOTTA.NEWS blogger is Weldon Kipng’etich. Weldon, a self-styled political analyst who gives his view on what Raila should do to clinch the presidency in 2022 poll.

The economy is failing and things are getting tough by the day if the massive job cuts and high cost of living is anything to go by.

For now, all we can do is hope the situation will improve; Kenya has been worse times after all.

But even under these circumstances all seems set for the 2022 contest that is likely to pit the former prime minister Raila Odinga and Deputy President William Ruto. But just what are Raila’s chances in 2022 race?

‘Raila will never be President’ is almost a philosophy in some parts of Kenya.

However, anybody who has observed Kenya’s political scene might tell you 2022 poll is Raila’s best chance at being elected president of the Republic of Kenya.

However, the ODM leader has to make some adjustments to achieve his presidential dream.

In my opinion, the issue that has stopped Raila from ascending to the presidency is his inability to coin a solid plan and stick to it to the end.

First, over-excitement has always been Raila’s bane. The ODM leader tends to get distracted and over-excited on his way to his destination.

It’s the reason I’m convinced someone should give the ODM leader a copy of Paulo Coelho’s The Alchemist which details the importance of shunning distractions while chasing a dream or as the book calls it, the Personal Legend.

This was the case in 2007 where the ODM leader got excited by the huge crowds ODM rallies pulled and thereby concluded he had won the contest with retired president Mwai Kibaki.

Many people will continue lying to Raila that he won the 2007 poll, but a keen statistical analysis shows he was beaten by Kibaki whose strongholds registered a turnout of over 85% as Raila’s struggled with a 65% turnout.

Uhuru Kenyatta will be retiring in 2022 amid clims that ‘he’s too young to retire’ . There are claims Building Bridges Initiative recommendations aim to have him stick around after 2022. Photo: Courtesy

The same situation happened in the subsequent elections in 2013 and 2017. In fact, a friend once told me Raila suffers from Icarus character in the famed Daedalus and Icarus story.

For starters, the story tells of how Daedalus, a brilliant craftsman made a pair of wings for his son Icarus and himself.

Desperate to flee the island, Daedalus uses wax to build some wings for himself and his son Icarus.

Daddy Daedalus warns his son to fly at a middle height: the seawater will dampen the wings and the sun will melt them. (Not good either way.)

Icarus heeds his father’s advice for a bit, but then he gets cocky. He’s having so much fun flying that he forgets the warning and flies too close to the sun.

Sure enough, his wings melt, and Icarus plummets into the sea and drowns.

If Raila wants power, then he must change tact in order to win the 2022 poll.

This calls for the former PM to think critically and come up with a foolproof strategy that will incorporate all that he has learned in more than 35 years he has been in active politics.

One of those things is that he must copy what Uhuru did in 2013. He must abandon ODM and form a new party.

In 2013, Uhuru noticed it would have been impossible to sell his presidential bid through KANU- a party synonymous with oppression and economic doldrums.

Even though Uhuru is former president Daniel Moi’s blue-eyed boy, he knew the party would be a great liability having seen how he was shunned in his own Central backyard in the 2002 poll.

That is how Uhuru seized and refurbished TNA and used it to win the 2013 poll.

Should Raila Odinga worry about leaving ODM? The answer is no. The ODM has enabled so many people to achieve their personal legends and it’s now time for Raila to pursue his own.

Also, the orange party has accomplished an exemplary feat in terms of minting billions for the Odingas.

ODM is Raila’s personal property and the day he abandons it and joins a new party, his new house will become as strong and popular as the orange party.

ODM cuts an image of party of goons and motormouths, violent and uncultured supporters who delight in causing chaos and bringing the country to a standstill.

This is not a good image and that’s why Raila must form a new party even if he decides to call it a ‘Handshake Party’ complete with a portrait of him and his brother Uhuru Kenyatta.

In the same vein, he must delegate the work of fighting William Ruto to his lieutenants like Mombasa Governor Hassan Joho, Edwin Sifuna and other ODM seasoned motormouths.

It is for the same reason the DP uses Kapseret MP Oscar Sudi to say things he would not directly tell his boss, President Uhuru.

What’s more, he must focus on issues during campaigns in Rift Valley and Central Kenya instead of appearing to hold beef with whole communities.

This approach is handy as it will attract more liberal Kalenjin and Kikuyus into his fold. All said and done, people appreciate a person who sticks to issues as opposed to empty demagoguery.

Looking at Raila, the ODM leader has a good start with at least 5.5 million votes. What’s more, Mt Kenya moneybags, notably the Murang’a billionaires are solidly behind him.

Finally, Raila must prepare to spend money on his own presidential campaign. Word has it the ‘Hand Cheque’ was a lucrative deal that saw him pocket billions. His mkono birika tag has not worked for him in the past polls.

Opinions expressed in this article are solely that of the writer and do not necessarily represent the position of GOTTA.news. We welcome writer to give their views on social and political issues. Send your opinion to info@gotta.news