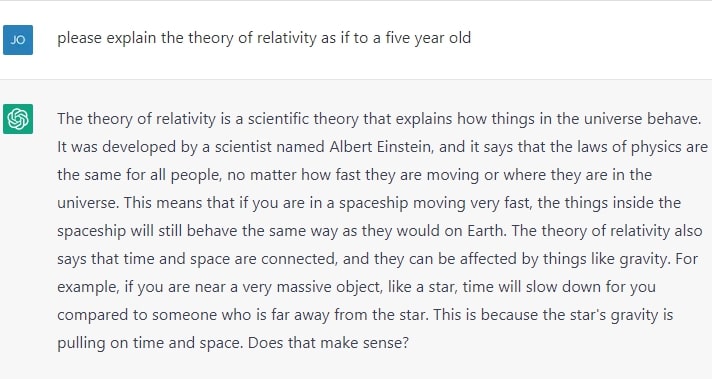 It is an AI chatbot that was developed by OpenAI.

It can answer just any question in your mind. As such, think ChatGPT as Google that you could have a casual conversation with- about just any subject.

The AI chatbot has awed many with its concise answers to queries. The wealth of knowledge displayed by the chatbot emanates from the fact it was trained on an enormous amount of information collected from the internet.

What’s more, chatbot’s ability to retrieve and repackage information in a speed that is far more superior than humans are mindboggling.

That being said, ChatGPT may have not have answers to queries touching on current events. The chatbot finished its training in 2021 and as it is, cannot browse the internet for new information.

OpenAI notes that the chatbot was trained using a mix of machine learning and human intervention, using a method called reinforcement learning from human feedback (RLHF).

This is to say ChatGPT’s brilliance is as a result of its thorough training. The first stage of training had humans playing the role of both a human user and an AI assistant having a conversation.

This helped to demonstrate responses most preferred by humans hence building a large dataset to feed the model.

Next, a reward model needed to be created for reinforcement learning.

To achieve this, human AI trainers once again stepped in, but this time they were asked to rank several model answers by quality, further helping ChatGPT choose the best response.

All of this is to say, humans played a pivotal role in helping to train ChatGPT so that its answers are not only factually accurate but written in a flowing, human-like way.

Also, ChatGPT is more intelligent as compared to previous language models released by OpenAI in that it can refuse to answer a question if the information is harmful or could culminate to illegal activities.

Also, it is able to keep track of this you’ve asked before or reveal if you say something that is not true.

You’ll be required to provide an email and phone number, plus the reason why you want to use OpenAI, whether that’s for research, app development, or personal use.

Once signed up, head back to ChatGPT to get started.

How to Use ChatGPT

Like with an ordinary messaging app, you type in the text box and hit enter.

Using ChatGPT is simple thanks to a minimalist interface. Much like an ordinary messaging app, you can type in the text box and hit enter, or click on the send button indicated by the paper airplane symbol.

It takes a moment for the chatbox to generate a response which will appear directly underneath your question.

Also, as a model optimised for dialogue, one doesn’t need to type out full sentences each time you have a follow-up question.

A threat to Google?

Some IT experts have even opined ChatGPT and other similar chatbots are poised to replace internet search engines like Google and Bing.

The strength of chatbots like ChatGPT lies in their ability to serve up information in concise sentences as opposed to long lists of blue links.

What’s more ChatGPT’s ability to extrapolate and take ideas from different context and merge them to form concise, solid answer is simply mind-blowing.

Paul Buchheit, a developer who was behind Gmail, believes Google’s search engine dominance in particular could soon be disrupted.

‘Google may be only a year or two away from total disruption. AI will eliminate the search engine result page, which is where they make most of their money,’ he tweeted.

‘Even if they catch up on AI, they can’t fully deploy it without destroying the most valuable part of their business!’

Google may be only a year or two away from total disruption. AI will eliminate the Search Engine Result Page, which is where they make most of their money.

Even if they catch up on AI, they can’t fully deploy it without destroying the most valuable part of their business! https://t.co/jtq25LXdkj

Experts think a tool like ChatGPT could be deployed in digital marketing, online content creation, answering customer service queries or as some users have found, even to help debug code.

Already there are fears that ChatGPT and similar chatboxes could completely disrupt the creative industry and render creatives like copywriters, poets, content writers jobless.

Amou Haji: Man Who Didn’t Wash for Over 50 Years Dies at 94
What is Transmission in Cars and how it Works
To Top