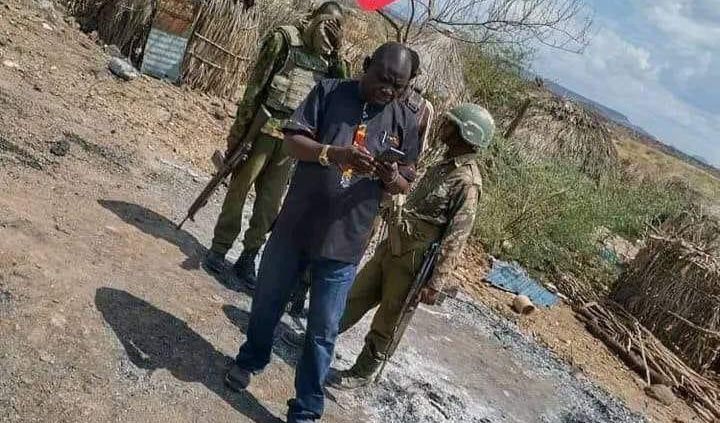 A police officer was overwhelmed while on duty after seeing bodies after seeing remains of people burnt beyond recognition.

According to a local news publication, suspected bandits staged an attack in the area; Napeitom village in Kapedo, West Pokot County.

During the Sunday night attack, the bandits are said to have burnt people in a bid to wipe out the entire village.

Although some villagers survived the attack, seven people among them five children were burnt to ashes.

While responding to the aftermath of the attack, the police officer in question could be seen weeping after seeing the remains of the attack.

Other officers who arrived at the scene were also overwhelmed by what they witnessed.

In February, Interior CS Fred Matiang’i called for the arrest of Tot High School principal for violation of public policy.

This is after students and teachers drawn from the school were ambushed by bandits and their bus sprayed with bullets leaving the driver dead and scores injured.

CS Matiang’i pointed a blaming finger at the school principal, noting that the incident could have been avoided if the school policy was adhered to.

“I agree with the Inspector General of Police that we will arrest that principal and he will be prosecuted for violation of public policy,” CS Matiang’i said.

READ ALSO: CS Matiang’i Explains What Miguna Needs to Do to be Allowed Back in Kenya

“The attack we had on the school bus last night ought not to have happened in the first place. That school violated the school policy of moving children beyond 6 pm. The attack took place at 10:30.”