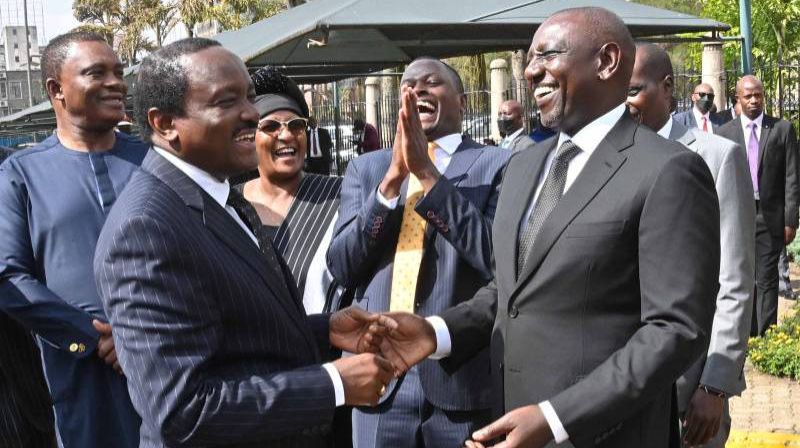 And now, days after Ruto was declared president elect, Kalonzo is reportedly interested in joining his camp and work with him.

At the same time, a section of Ukambani residents want Kalonzo to join Ruto’s camp so that the region could reap from the government.

They also want the president-elect to work with leaders from the region who vied under the UDA party but lost.

“We request you (Ruto) on his behalf to have him inside your government. We need development in our marginalised region now more than ever,” a local resident was quoted by The Star.

While campaigning ahead of the just concluded polls, Ruto had offered Kalonzo a job in the UDA government if he joins them.

Speaking in a campaign trail, the outgoing DP noted that he regretted Kalonzo’s treatment in Azimio, saying he will save him.

“I know Kalonzo does not like me but it is not for any other reason, he has been incited by that man (Raila), why can’t you allow me to save this man?

“This government we are going to form we will give him a job. He has suffered long enough,” Ruto said amid cheers from the crowd.

However, Kalonzo fired back at the UDA team, insisting that he is not interested in his job offer.

“Yesterday (Friday) he angrily talked a lot about his boss President Uhuru Kenyatta telling him to leave him alone. Now I want to tell Ruto, please leave Kalonzo alone

“Not just about Kalonzo benefitting . He has been saying that I was lied to, I was sidelined. Pilipili usiyo kula yakuwashia nini?” He posed.

READ ALSO: Rigathi Gachagua Says Ruto’s Swearing In to Proceed With or Without Uhuru

Now they're thones remaining in Azimio. Kambas have already given Kalonzo/Wiper an ultimatum. UDM has joined KK

Jubilee died the moment Ruto and allies walked away

Others nurture parties, Sisi we were nurturing a family Biznes. Youth leader, Musungu is almost 45

Dear President Elect Dr. Ruto, as much as you are seeking political collaboration with other like minded political leaders, Stephen Kalonzo Musyoka will be a liability in your government. Avoid him.

I've been told that @skmusyoka is about to cross to Kenya Kwanza. He wants to become National Assembly Speaker. Things are thick at Kuzimia. I want to wake up tomorrow to the news that despot Uhuru Kenyatta has SOBERED UP and is heading to Ichaweri.

. @WilliamsRuto please do not welcome @skmusyoka into #KenyaKwanza. We do not want the Spirit of Confusion in our Alliance.

Kalonzo should not join Ruto.He will be swallowed &become unrecognizable by 2027.He should start doing what he promised- start campaigns for 2027,subtly supplant Raila &take charge of half the country that disapproves Ruto presidency.

Young, steadfast, eloquent. Kalonzo SKM must stay in opposition for RELEVANCE, in 2027 we will all realize that he's what Kenyans need. Ruto will appoint the likes of Mudavadi and kick them out in less than 3 years. The Mt. Kenya will have a candidate.Enough is Enough #NewsGang pic.twitter.com/lay9wr4J3g

With Raila almost exiting the Political stage, Kalonzo can't risk joining Kenya Kwisha.He wants to inherit Raila's strongholds which he'll certainly do. Unfortunately,with Ruto Presidency, that's a 10yr Presidency before he hands it over to Gachagua who'll pick a DP from R.Valley

The guy is a very bad decision maker he went to Lazimio due to greed, if he could not see KK was winning which was apparent by the way…even a blind man could see WSR was going to win.. if he can't make that important shot what will he add to the team. Let him stay out.

all he his friends woke up and smelled the coffee while he was still sleeping including Muthama. Its high time he stops sleeps, join the government kaa ndani ya chama and help you people.