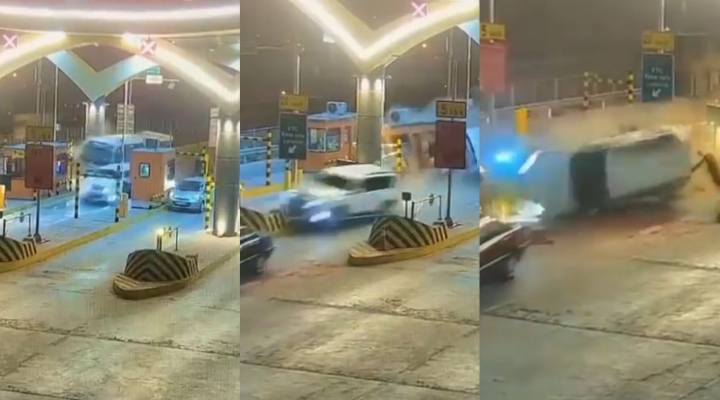 A CCTV footage of the latest accident on the Nairobi Expressway has been released showing moments after the accident that happened on Monday, July 4.

The accident involved an Embasava Sacco bus which rammed into a private vehicle, Prado TX, at the Mlolongo exit.

According to the video, the bus which had over 20 passengers onboard crash into the toll station and hit the white SUV at around 7 pm.

After being hit, the driver of the Prado TX lost control and hit the culvert before the vehicle overturned.

The bus also overturned after hitting the vehicle.

In a statement, Moja Expressway which manages and maintains the expressway said the bus swerved several times while approaching the toll station.

Following the accident, one toll attendant was injured while at least 22 out of 33 passengers aboard the minibus sustained injuries.

The occupant of the car who is said to be a Nairobi-based police officer escaped unhurt.

“The matatu swerved severally while approaching the exit and unfortunately crashed into one toll booth and one SUV. We regrettably have one injured toll attendant who is receiving treatment while 22 out of the 33 passengers aboard the matatu sustained injuries,” the company said.

The accident comes barely two weeks after another accident that left one person dead.

The motorist crashed into the Mlolongo toll station while on high speed on Saturday night, June 25 leading to his death.

According to a CCTV footage from the toll station, the car hits slow bumps before the station and speed into vehicles being serviced at the station.

The driver died on the spot while two passengers in the speeding car sustained serious injuries.