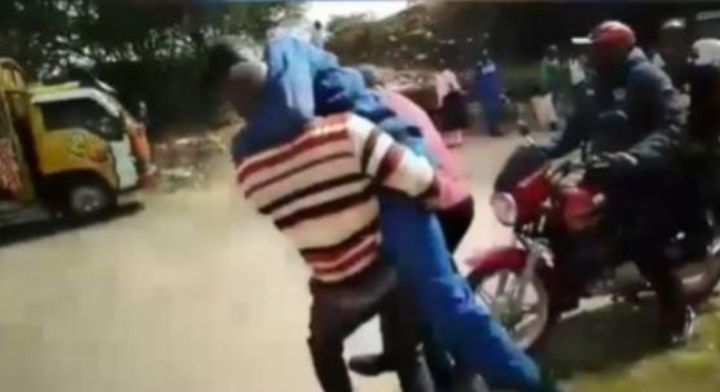 An officer who appeared drunk and staggering while on duty has died by suicide.

According to Nation, a police report indicated that the officer died inside the police houses in Buruburu, Nairobi County.

The officer’s death came barely 24 hours after the National Police Service (NPS) said it was considering disciplinary action against the officer after the video went viral.

“A uniformed police officer is a visible representation and face of government and is required to remain extremely disciplined and professional while on duty and off duty,” NPS said.

NPS termed the behavior as unbecoming, unacceptable and unprofessional.

“The Buruburu Police command has taken corrective measures for the situation, and the matter is being handled internally. As NPS, we hold our officers accountable with regard to matters of discipline, decorum, and conduct to ensure efficient and effective service provision to the public,”  the statement added.

Police officer attached to Buruburu station, Nairobi who was filmed drunk hangs himself a day after a disciplinary action was taken against him. pic.twitter.com/hDjHxiqUOx

Elsewhere, a man was arraigned in court after he reportedly stormed a police station and damaged property of unknown value.

Magistrate Wandia Nyamu heard that the accused, Justine Onami Osinde pelted Ngara Police Station with stones and broke 17 windows after an officer at the station reportedly insulted his pregnant wife.

The accused told the Court that he threw stones at the station after the officer referred his pregnant wife to a prostitute.

“Your honour, before I take plea I pray this court to refer me to a constitutional court to seek justice, my rights were violet by the police

“I want to know if it’s correct for a police officer whom I know to call my pregnant wife a prostitute,” Osinde told the court.

Osinde said the incident happened when he and his wife were looking for a place to sleep since their house had been locked due to lack of rent.

“The officer walked out of the bar and called my wife prostitute while removing her clothes, that is when I jumped to protect her,” he added.

Following the incident, the accused said other cops who were on duty ganged up against him and forcefully arrested him before taking him to Ngara Police Station.

He pleaded not guilty and was released on a cash bail of KSh 20,000.