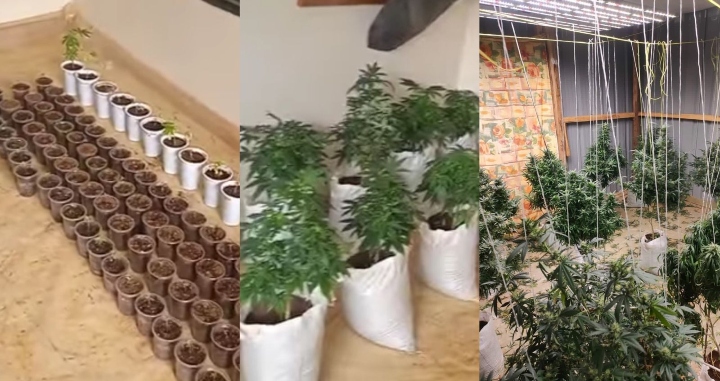 Police in Eldoret have launched a manhunt for a university student who is believed to be engaging in bhang farming.

This is after police officers raided a six-bedroom house in Elgon View Estate on Tuesday, July 5 and found bhang grown inside the rental property.

In a statement, the National Police Service (NPS) said officers stormed the house after receiving a tip-off from the members of public.

To grow bhang inside the house, the suspect used various advanced methods including using LED lighting to provide adequate lighting for the plants.

The police said the plants which weighed at least 33.5 Kgs has an estimated street value of not less that KSh 1 million.

“The officers conducted a thorough search in the two buildings within the compound and recovered 21 cannabis plants in the main bedroom, 68 in the sitting room, 14 in the dining room, 26 in an adjacent iron sheet walled house and assorted personal documents,” the police said.

The main suspect has since been identified as Kipchumba Michael Kibet.

“We appeal for any information that can lead to the arrest of the suspect and urge the public to desist from engaging in criminal activities,” the police added.

All the plants were uprooted after having been documented by DCI Scenes of Crime personnel. The plants weighed 33.5 Kgs with a street value of about one million Kenya Shillings.

A manhunt has been launched to arrest the main suspect namely Kipchumba Michael Kibet. pic.twitter.com/G7WIhRhcza

The arrest sparked reactions from netizens who were stunned by the brilliance of the suspect behind the smart bhang farming.

MwaniKing: The setup has artificial light, humidifiers, heaters, soiless media and props. This is an investment worth hundreds of Ksh. Legalize.

Vincent Mongare: This is very innovative. He should win a prize, not a jail term.

PD Lorenzo: This is serious Agronomist, he has gone ahead to increase green space in the homestead thus mitigating effects of Climate Change

Lavender Amunga: Hii ni akili mtu wangu, wah! He should be given a chance to advise those in the agricultural sector on how to grow crops for commercial purposes.