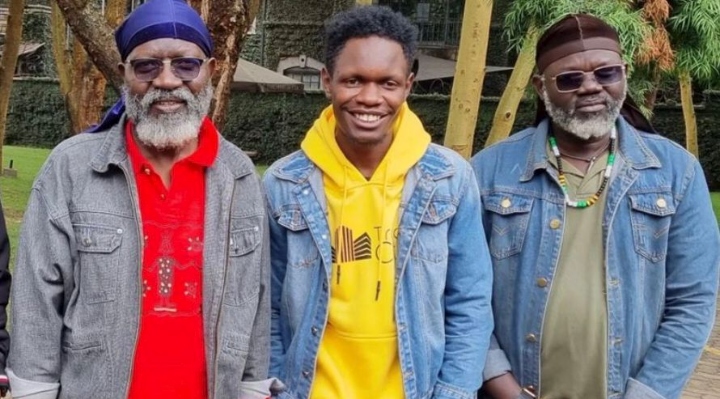 The internet sensation was accompanied by comedians Oga Obinna and 2 Mbili who organized the meeting.

In the past few days, Owino has been the topic discussion on social media due to his resemblance to Wajackoyah.

The young man looks exactly like Wajackoyah; from the signature durag, glasses and the white beards.

According to a video shared online, Owino travelled to Karen using his motorbike which he parked outside the premises’ gate before meeting Wajackoyah.

While inside the office, the presidential hopeful hugged Owino in disbelief suggesting that he was also surprised by their striking resemblance.

After a brief chat, Wajackoyah opened a safe and took out a bundle of cash and an expensive watch which he handed them over to Owino.

“I have never given this kind of gift to anyone except my grandson who is in Spain. Always wear it on your right,” Wajackoyah said.

Elsewhere, a man in Eldoret stunned many after claiming that he smokes bhang to promote Wajackoyah.

Appearing before an Eldoret Court, 47-year-old Boniface Mutua said he smokes bhang to get energy to campaign for the presidential hopeful.

“For now, I smoke bhang to gain courage and voluntarily campaign for Wajackoyah, who has promised to legalise the cultivation and smoking of bhang,” he told the court.

Mutua was arrested in Bahati, Ainabkoi Constituency after being found in possession of three rolls of bhang estimated at KSh 90.

He also told the court that he will be among the pioneer farmers of bhang if Wajackoyah becomes the president.

“Who knows, I might be among the commercial farmers of bhang if my candidate is elected president and legalises bhang,” Mutua stated.

The magistrate advised Mutua to stop consuming the drug until his preferred presidential is elected.

Singer Bahati: Why I Married Diana Despite Her Being Older than Me
Pomp and Colour as Willis Raburu’s Sister, Lover Wed in Lovely Traditional Ceremony
To Top