Police have released identities of three robbers linked to the robbery incident in Kandisi in Ongata Rongai, Kajiado County.

The three were arrested on suspicion of taking part in a robbery incident where a woman was robbed at gun point.

The three were arrested on Wednesday, two days after the incident, with detectives looking for two other robbers and a mastermind believed to be a rogue police officer.

The arrested suspects include 24-year-old Robert Kimani Irungu, from Kware in Ongata Rongai whomwas a found with a pistol hidden inside a charcoal jiko inside his rented house.

“Kimani was found in possession of a Browning pistol, serial number B436591, without a magazine,” police said.

The other two are Jane Achieng Ochieng from Kibera and John Ochieng Oranja from Bombolulu Kibera who are both 21 years old.

The fourth suspect is an M-PESA agent.

According to police spokesperson Bruno Shioso, officers recovered a TV, sub-hoofer and items of clothing that the robbers were wearing during the incident.

“The dragnet is being widened to nab more suspects still on the run. The Inspector-General of Police has ordered a crackdown within the areas and environs of Ongata Rongai targeting organised criminal gangs terrorising and robbing law-abiding citizens,” he added. 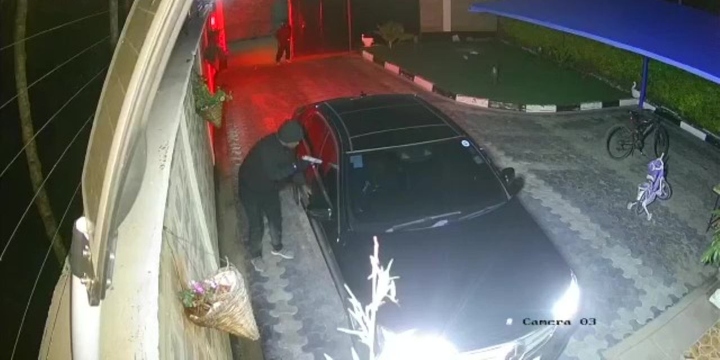 A screenshot of the Rongai Robbery PHOTO/COURTESY

According to a CCTV footage of the robbery, six thugs accosted the woman just moments after driving into her gated house.

According to the video, two thugs are seen armed with handguns, another with a machete and an AK47 rifle.

The woman locked herself inside her car but her attempts to drive away bore no fruits.

After smashing the car window, the thugs ransacked the vehicle and picked a few items and proceeded to drag the woman inside her house.

While inside the house, the one of the robbers is seen manhandling the woman as the other ones ransack the house.

They picked valuables including phones and a soundbar.