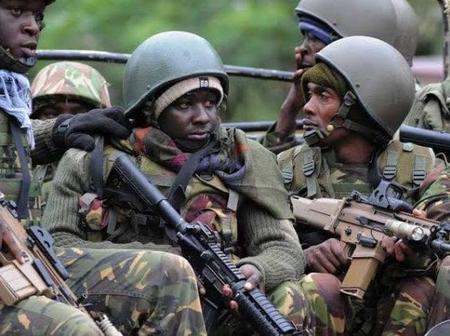 The Kenya Defence Forces are the armed forces of the Republic of Kenya. The Kenya Army, Kenya Navy, and Kenya Air Force comprise the national Defence Forces.

The Kenya Defence Forces are the armed forces of the Republic of Kenya. The Kenya Army, Kenya Navy, and Kenya Air Force comprise the national Defence Forces.

Like many patriotic young men and women in Kenya, you might be interested in a career in the military and wish to join the Kenya Defence Forces but you lack information about the rank structure, promotion and remunerations, etc.

This article will inform you on the military ranking as well as well as salary scales for those charged with the duty of protecting the country from external aggression. 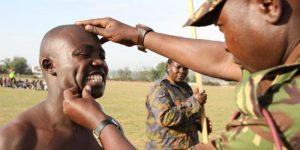 Like any other military in the world. KDF insists on white and strong teeth. Discoloured teeth is a sign of fluorosis which means inability to cope should the soldier be deployed in the wild where only dry rations are available. Photo: courtesy.

The President of Kenya is the commander-in-chief of all the armed forces.

The Kenya Defense Forces are mandated to defend and protect the sovereignty and the territories of the country by enhancing regional economic stability and combating terrorism to a large extent.

The KDF is divided into three branches; the Kenya Air Force, Kenya Army and Kenya Navy.

The general is the highest-ranking Commissioned Officer and the Chief of Defence Forces while the Private is the junior-most rank in the Non-Commissioned ranks.

Also, it is important to note that, for a person to gain promotion to a higher rank, he or she will be assessed strictly based on merit.

During the assessment, the promotion rules will apply whether he or she is a Commissioned or Non-Commissioned officer.

Listed below are ranks of Non-Commissioned Officers popularly known as NCOs. 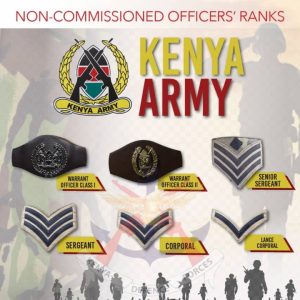 Below are ranks of commissioned officers; 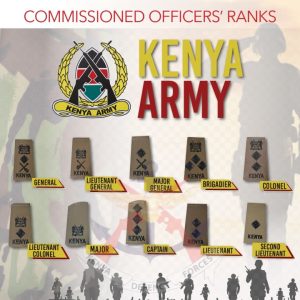 How much does Kenya army officers earn?

Like any other job, the Salaries and Remuneration Commission of Kenya review salaries of army officers which are evaluated every four years jointly. 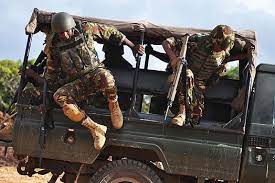 Listed below is a categorisation of the Kenya Army salary scales for all the ranks.

Specialist Officers are those who enter the service with an underlying training in any professional field, especially graduates.

Depending on the rank and what you have specialised in, you should expect your KDF specialist officers salary to be different from the rest of the other officers.

Allowances depend on your rank or the mission you have been sent to take part in, such as peacekeeping.

It is important to note all officers enlisted in the KDF are riflemen. This is to mean, for instance, a soldier who is a cook or an officer doctor in the frontline, at being tapped can pick up a weapon and fight.