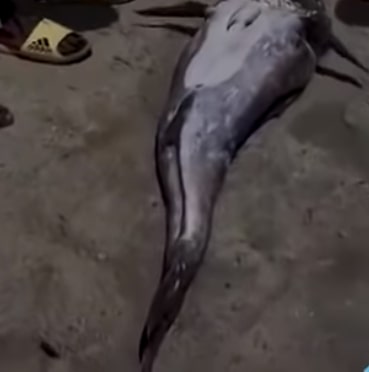 Police have dismissed as fake a video circulating on social media purporting to show a mermaid that was allegedly sighted in Ukunda, Kwale county.

A video has been circulating on social media purporting to show a mermaid that was allegedly sighted in Ukunda, Kwale county.

The video seen by GOTTA.news shows a seemingly young female with a dark skin complexion lying on the shore of the ocean.

As mermaids are thought to look like, the person, from the waist downwards appears to be a fish.

However, the Coast Regional Commissioner and Kwale County Commander have dismissed the video of the mermaid in Kwale as fake.

It appears that the clip was staged by inserting the person inside the fish’s mouth as both ends are receptive to touch.

Baraza Morgan opined: “The police are denying it because they want it to stay that way, it is a conspiracy.”

Isaac Mwangi said: “Who would believe such nonsense in the first place? Are the police short of work?”

Ken Olindi posed: “We have heard about mermaids for a long at the coast. Is it true these things exist?”

Jim Black said: “The mermaid is real I was there at the scene..why is the government denying it?”

Charles Dhano said: “What is it then, I’m sure those cops don’t even know what a mermaid is… Ama namna gani watu wangu.”

Mary Abungu said: “The fact that guys from the coast are not talking or grabbing the fish in all directions is clear that this is fake. Have you ever met a quiet Mswahili, especially at the beach? Please remove Nani’s son from that fish.”

Hottie said: “Are you telling me that out of all these people, the only one recording this is the guy with the poorest camera quality? Also strange how in this era of social media only one person is recording?”

But are mermaids real?

In folklore, a mermaid is an aquatic creature with the head and upper body of a female human and the tail of a fish.

Even though there is no evidence that mermaids exist outside folklore, reports of their sightings continue to the present day.

The aquatic humanoids in recent centuries are depicted in paintings, books, comics, animation, and live-action films such as the popular series identified as Siren.

What to Do In Case Of a Nuclear Attack
Albert Einstein: His ideas changed the world, yet was unable to learn how to drive
To Top