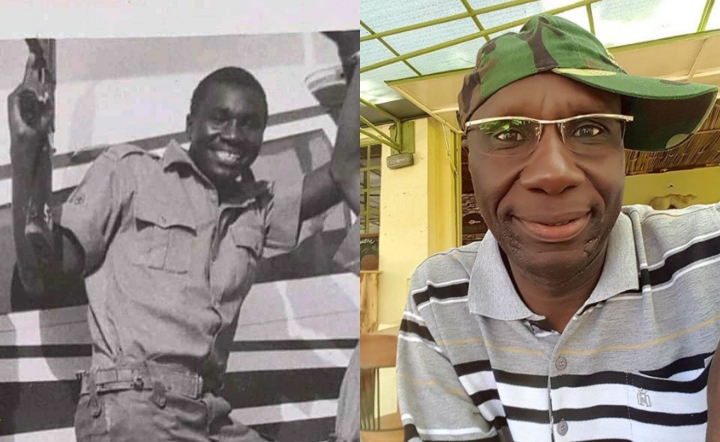 The photo dated 1974 and which according to Fred Obachi Machoka was captured along the Kenya-Somalia border has the celebrated radio presenter in GSU uniform.

Legendary radio presenter Fred Obachi Machoka has lit up the internet with a sweet TBT photo which gives insight to his self-proclaimed title of The Retired General.

The photo dated 1974 and which according to Obachi was captured along the Kenya-Somalia border has the celebrated radio presenter in GSU uniform.

Along with a G3 rifle in his right hand, the younger Machoka is seen brandishing a smile that mirrors the vigour of youth.

Esther Nyaboke: And you looked very hot in that uniform, wow.

Erick Kipkurui: Role model to young generation….That life is like a ladder, step by step to a higher level.Godbless you Uncle Freddy

He went on to resign his job as a signal controller in GSU to take up the media job.

He started out in KBC where he promoted products and as they say the rest is history.

Obachi, who is in his mid 60’s is married to Sophie Machoka and are blessed with four children and two grand-children.

In a past interview in 2015 with KTN, Obachi said he has been able to remain relevant for long as he did not boot-lick politicians and only listened to his fans.

He said he was always persuaded to make the society better and he did not fear rebuking even the head of state if he felt he was not steering the country in the right direction.

” My listeners are my paymasters. Politicians can be sacked by wananchi after a five-year term but my listeners remain,” he said