It has now emerged that indeed Deputy President William Ruto met with ODM leader Raila Odinga over a plan to ouster President Uhuru Kenyatta, but the plot failed to materialise due to personal interests.

It has further emerged, Raila and Ruto, who gave retired president Mwai Kibaki a hard time in the 2007 election, touched base in the late 2017 and early 2018, with the aim of impeaching Uhuru Kenyatta and sharing power between themselves.

Now the typical no-holds-barred style of presidential campaigns and exchanges has seen the details of the plot exposed to the public.

Even though both Raila and Ruto have separately denied of involvement in such plot, the chronology of events show that indeed DP Ruto had met with Raila and the talk of Uhuru ouster taking Centre stage in the discussions.

In an April 2019 interview with Citizen TV, DP Ruto admitted he had spoken with the ODM leader at least four times during the stalemate over the 2017 presidential election.

“Before Raila Odinga engaged the President on the matter of the handshake, he engaged me,” said DP Ruto during interview with Hussein Mohammed.

“He approached me on four occasions after the election to have a discussion but I declined to engage with him for two reasons: One, in Jubilee we have one central command; President Uhuru Kenyatta is the party leader and president and we all defer to him.

If there is any engagement with anybody on matters politics, it has to start with President Uhuru Kenyatta.

“For your information, for every approach that was made by Raila Odinga to me, I informed the President. I told him I will not engage Raila Odinga. The second reason is, I did not believe that he was doing this in good faith.” 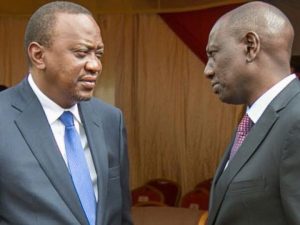 DP Ruto, maybe having noted the fall of the plot, said he eventually realised ODM leader was out to bring down the Jubilee government.

“On two occasions we actually spoke on the phone when he sent some emissary. And I could hear the trend, you know…. ‘You can see the President has already started to appoint ministers’. You remember when the President appointed the first six ministers and there was hullabaloo there,” said DP Ruto.

In the interview, DP Ruto further painted a picture of a pragmatic deputy president well seized with government protocol.

“I told him initially we were running a coalition but today we have a party, and the President is the head of that party. He doesn’t have to consult me. I could see where the thing was going, to try and say I’m being short-changed and that kind of narrative, which to me is fake. So I did not engage him.”

He went on: “So finally when the engagement was carried out under this handshake story, it was not necessary for President Kenyatta to let me know.

But being the gentleman that he is, he actually brought me on board. He told me, ‘Mr Deputy President, I am having an engagement with the leader of the opposition’. And I gave my views,” said Ruto in in demonstrating that Uhuru knew Raila was courting him.

In a report published by Nation on Thursday, March 31, Suna East MP Junet Mohammed cast Raila as one not initially opposed to the deal but who saw Ruto overtures as an opportunity in teaming with DP Ruto’s boss.

The Suna East lawmaker, in an interview with Nation, said Ruto had reached out to Raila after Jubilee’s win in the second round win in October 26, 2017 presidential rerun poll.

According to Junet, active engagements between Raila and Ruto started in January 2018 after the DP and his allies registered dissatisfaction the President was excluding them from his new Cabinet.

Junet claimed Raila was offered the position of Deputy President in the talks, with Ruto assuming leadership of the country after Uhuru was ousted. 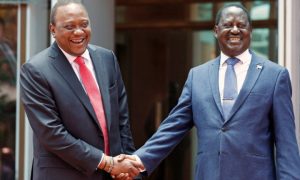 Junet claimed the Ouster talks were held in a private residence of a prominent Rift Valley businessman in Karen who had lost out on lucrative government tenders.

However, the lawmaker says the ODM leader saw an opportunity to achieve his political end as well as settle political score with DP Ruto who he felt had betrayed him by supporting Uhuru Kenyatta in 2013.

Uhuru has since endorsed Raila’s State House bid and has been at the forefront in campaigning for him.

According to Junet, the impeachment plan was to be hinged on Uhuru’s disobedience for court orders and gross violation of the Constitution.

The plot was to have the ODM leader mobilise at least 100 legislators in both the National Assembly and Senate as DP Ruto mobilized the rest with the aim of having the 234, the constitutional threshold to kick out President Uhuru.

On Tuesday, March 29, Raila who is the Azimio la Umoja Presidential aspirant, denied claims by Deputy President William Ruto that he was the one who plotted to impeach President Uhuru Kenyatta.

The two frontrunners have been bandying words, each accusing the other of being behind the impeachment plot.

The Kenyan Constitution states that a sitting a sitting president can be kicked out on the grounds of gross violation of the supreme laws, or where he or she is suspected to have engaged in criminal activities, among others.

In case of Kenya’s bicameral Parliament, it requires at least two-thirds of its membership to support an impeachment motion to sail through.

If at least two-thirds of all the members of the Senate vote to uphold any impeachment charge, the President ceases to hold office.

Under such circumstances, the deputy president would assume office as President for the remainder of the term of the President.

A Letter to Women: Why You Should Never Reveal Your Body Count
Corporal Mjinga: Story of Kenyan Cop Shamed for Refusing Bribe
To Top