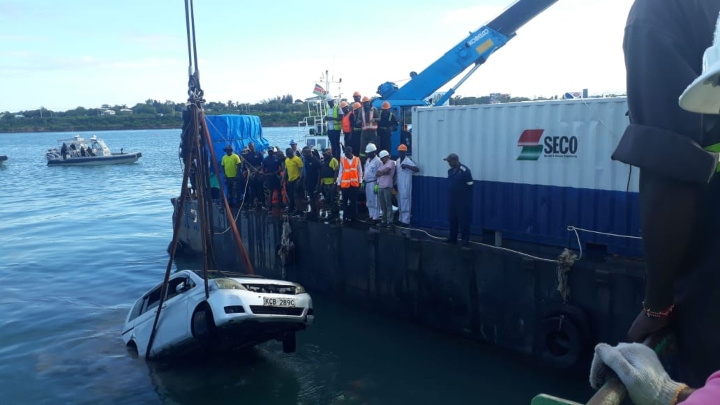 At about 4:15 pm Friday, the vehicle that sunk with Mariam and Amanda was pulled out of the Indian Ocean waters.

It was muddy in the inside and a video that has been circulating on social media shows it had been in the murky waters. Perhaps in a cave,

An already scared mother trying to shield her worried daughter from imminent death by drowning is the picture conceived in minds of those who saw the bodies of Mariam Kighenda and daughter Amanda Mutheu.

The two were locked in a tight embrace at the back seat of the Toyota Isis KCB 289C.

The two drowned on Sunday September 29 and it has been an agonizing 13-day wait for family before the car was retrieved from the ocean bed, 58 metres below.

Gotta.news has learnt the exercise could have ended earlier were it not for ego clash pitting the Kenyan Navy and other teams called to assist in the recovery mission.

A tipster report backed by a viral audio tape of an unidentified KPA diver speaking to a reporter indicate the South African divers located the vehicle early in the week but clashed with the Navy after it insisted on taking credit for the recovery.

The South African divers from SubSeas Services were also concerned that media had ignored efforts from other teams and were only heaping praises on the Kenya Navy.

At about 4:15 pm Friday, October 11, 2019 the vehicle that sunk with Mariam and Amanda was pulled out of the Indian Ocean waters.

The vehicle was muddy in the inside and a video that has been circulating on social media shows it had been in the murky waters. Perhaps in a cave, 58 metres below, as Navy had said.

And just as promised, the military had to carry out it’s tradition. Prayers from the Anglican priest, the Catholic father and Imam.

And then it was time for The Last Post. Government spokesman, Col (rtd) Cyrus Oguna asked everyone to stand at attention, those in uniform led by Kenya Navy Commander Major General Levy Mghalu would salute in what is the military’s last rite in honouring the dead.

The solemn bugle called, the commanders on the front row led by Major General Mghalu saluted looking into boundless blue sea. Their probable wish: May such never happen again.

Mariam and her daughter Amanda neither wore the cap nor the boots and probably could not tell a difference between a rifle and a gun in their lifetime, but the deaths of the two had stirred the national ire; the Kenyan Navy was called names including incompetent, the Kenya Ferry Services (KFS) blasted for carelessness.

UPDATE: Car, bodies of Mariam Kighenda and Amanda that sank into the Indian Ocean on 29, September finally retrieved pic.twitter.com/iBht2BfHCB

KFS MD Bakari Gowa was not in yesterday’s ceremony and the KFS Chairman Dan Mwazo spoke briefly on behalf of the parastatal.

Major Gen Mghalu termed the incident a learning experience and commended his men for remaining focused despite insults from the angry public.

Governor Joho said was to take the incident as an accident that was beyond any human control.

He also commended the gallant sailors. Those who risked their lives by venturing into the murky, shark infested waters.

He termed the pulling out of the car a commendable effort; tens of vehicles have plunged inside the ocean and were abandoned.

Mvita MP Abdiswamad said Kenyans must learn from the incident. The soft spoken MP however laced his words with steel insisting that investigation be done and those found culpable punished. He promised to follow up the matter in the National Assembly.